Everything You Need to Know About Visiting Chora, Patmos 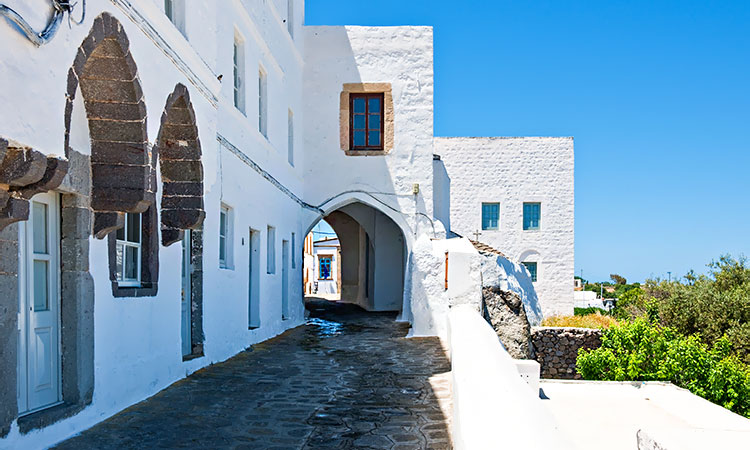 Chora is the capital of Patmos, Greece, just about 4km away from the main port of Skala. It’s an easy walk from Skala to Chora and back again, so if you sought out Patmos hotels in Skala, it’s only natural to explore Chora, Patmos. Built high on a hill, here you can walk the winding streets taking in the traditional, whitewashed architecture, as well as a history that includes Saint John the Theologian, who put Patmos, Greece on the map.

The History of Chora, Patmos

You’ll find throughout most Greek islands that the capital is simply called Chora, meaning “the town.” It’s similar to calling the most prominent street in a particular area “Main Street.” Some will even call Chora, Patmos “Patmos Town” for simplicity’s sake. But whatever you call the main village of Patmos island, it’s hard to miss the sight of it.

Chora is positioned on a hill, and from the ground you’ll see a number of whitewashed structures surrounding one tall, brown fortress. That is the Monastery of St. John the Theologian, which was built in the 12th century. Its position on the hill is no mistake. It was built so as to put invading pirates and Turks at a disadvantage if they tried to attack. They would have to climb up hill, in which time the city could seek refuge within the defensible monastery walls. This gives just a hint of Chora’s colorful history.

The most notable event, however, is certainly the appearance of John of Patmos, who sought refuge in a cave near Chora where he is believed to have received a revelation from God, encouraging him to write The Revelation of Jesus Christ, the final book in the Christian Bible. 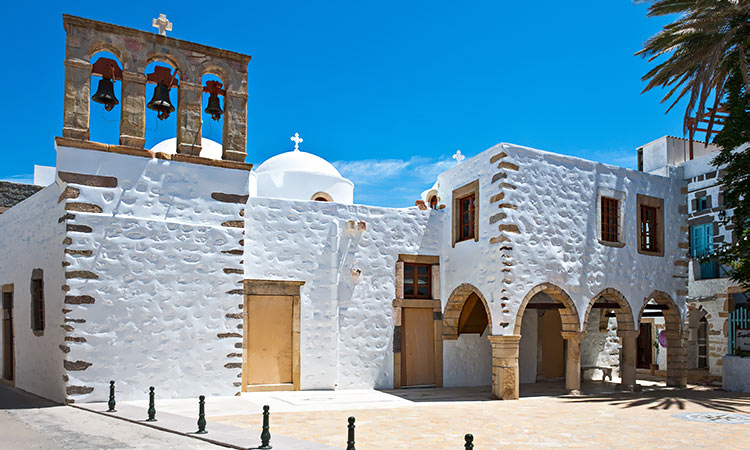 However, it was in the 16th and 17th centuries that Chora really hit its stride and began to resemble the city it is today. Wealthy captains settled in Chora and built mansions, some of which still exist today and some of which can even be viewed today. It was in this time that Chora began to resemble the town it is now, though in time, souvenir shops have cropped up for the many visitors who come, whether to see the architecture or the places of religious significance.

What to Do In Chora, Patmos

The first thing that most visitors do in Chora, Patmos is, of course, visit the monastery. Over 15 meters high and 70 meters wide, it cuts an impressive figure. Inside, you’ll find the chapel of Christodoulos, named for the founder of the monastery, which houses the skull of St. Thomas and pieces of the holy cross as well as wooden icons dating back to 1820. If you’re there during a service, you’ll notice the way the Byzantine hymns reverberate off the walls, adding to the spirituality of the experience. There’s also a bakery and a museum and library which houses ancient manuscripts and sacred relics. From there, you can follow a narrow road down to Patmos cave, the location where St. John received his revelation.

There are a number of cafes and shops where you can stop for a break after visiting the monastery. Next, you can see the unique windmills, some dating back to the 16th century and all restored in the 21st century to preserve their original character. There’s also a folklore museum located in one of the old mansions, giving you a taste of what it was like to live in Chora, Patmos hundreds of years ago. You can round out the day by visiting one of the nearby beaches, like Skala beach or Grikos beach, each 4km away from Chora, Patmos. 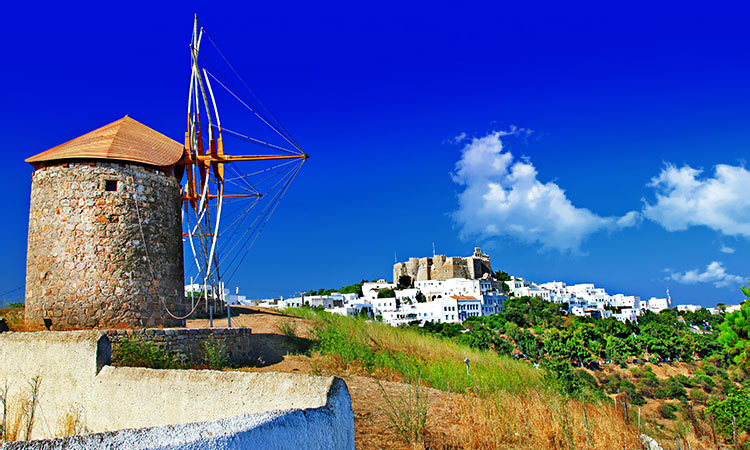 How to Get to Chora, Patmos

Chora, Patmos is a rugged landscape, but remarkably walkable, packed closely together. Most of the hotels in Patmos, Greece are located in either Skala Patmos or Chora, Patmos. If you stay in Skala, you’ll have both a short trip from the port to your hotel and a short walk from your hotel to Chora. You’ll even be able to see the way clearly. Just start following the road uphill. Along the way, you’ll find Patmos cave and souvenir shops, which you can visit or continue walking up to Chora.

Because Chora is the capital of Patmos island, Greece, it’s well connected to the bus system. You can bus to Chora not only from Skala but from many of the popular beach towns, making it easily accessible, and easy to return to your hotel at the end of the day.

When searching for Patmos Greece hotels, we still recommend Skala as your location, especially Chris Hotel on Patmos island. It has gorgeous ocean views, and it’s only a brief walk away from the stately capital of Patmos, Greece. You can make a day of your Chora, Patmos trip before returning to your hotel in Skala, and if you enjoy it, you can even return the next day.